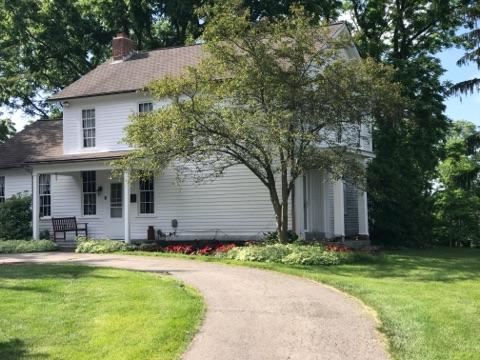 Some of the historical information you will find at the Society is about the Livingston House or the A.W. Livingston House. It is eligible for listing in the National Register under the Criterion B for its association with the owner and builder, Alexander W Livingston. Mr. Livingston has received worldwide recognition as a horticulturist in seed experimentation and seed propagation of the tomato. Alexander Livingston was the first person who succeeded in upgrading the wild tomato, developing different breeds and stabilizing the plants. In the 1937 yearbook of the Federal Department of Agriculture, it was declared that "half of the major varieties were a result of the abilities of the Livingstons to evaluate and perpetuate superior material in the tomato". Livingston's first breed of tomato, the Paragon, was introduced in 1870. In 1875, he introduced the Acme, which was said to be involved in the parentage of most of the tomatoes introduced by him and his competitors for the next twenty-five years. Both of these varieties were developed during the years he occupied the house.

This property is also eligible under the Criterion C as an example of an 1800 frame Victorian dwelling, custom-built to the highest standards of its time: knot-free clapboard siding, tulip poplar flooring, hand-blown glass windows, curved wood staircase, extensive millwork and molding, plaster on lath walls, circle drive entrance, quarry sandstone foundation. This famous home is a landmark in the City of Reynoldsburg and occupies a prominent location on well-maintained grounds. As a matter of fact, this house and its grounds are one of our local parks of note, and a visit to the Livingston House in any season is interesting and beautiful.

A.W. Livingston was born October 14, 1822. His parents already resided in the Reynoldsburg area. He was raised in a life of pioneer farming. Schooling was very limited, but he learned to read, spell, write and cipher in arithmetic. He had a quick retentive mind and he was a close observer. At an early age he was recognized among his friends and neighbors as an authority on all kinds of plants. He grew to be a large man, physically strong, and having excellent health. He also had a sunny, generous and optimistic disposition. He married Matilda Dickey Graham and they had ten children. One child died at age 2. In 1852, Livingston purchased seventy acres of land east of Graham Road on both sides of Palmer Road. It was on this land that A.W. Livingston Buckeye Seed Gardens were located.

Alexander built this home in 1864 having contracted a fine workman by the name of Nathan Orcutt. Mr. Livingston personally oversaw all construction and materials even paying $1.50 per 1000 board feet over the current lumber price so the exterior would be knot free.

Soon after Livingston became a land owner, the seed grower for whom he labored moved and Alexander bought 400 boxes of garden seeds. By 1877 he had 4,000 boxes of seeds in distribution from his own fields.

During these years he continued his experiments and studies to develop new and improved vegetables for his trade. He visited many state and county fairs. Learning all he could, he became personally acquainted with growers and market gardeners all over the country so that he could supply their specific needs regarding soil and temperature in order to grow a good canning tomato. Whenever he introduced something new, the leading seedmen of the county cataloged them. They relied solely on Mr. Livingston's reputation.

The ready endorsement of his fellow businessmen for Alexander's integrity was a reflection of his personal life. He served the Truro Seceders Congregation as a deacon. In 1863, he became an elder of the church serving through 1880. He, his wife and children, and all their employees were in church every Sunday, sitting side by side in the Livingston family pews.

Alexander often taught Sunday school at the Ohio Penitentiary. He conducted services at Blacklick, driving there with some of his children in his famous covered wagon called "The Ark". That very same wagon hauled many an escaping slave to freedom via the underground railroad.

When Alexander W Livingston had begun his attempts to develop the tomato as a commercial crop, his aim had been to grow tomatoes smooth in contour, uniform in size and having better flavor. One year, after many attempts, he passed through his fields, picking out particular tomato plants having distinct characteristics and heavy foliage. He saved the seeds carefully. The following spring he set two rows across his family garden located just below the hill and milk house. To his happy surprise, each plant bore perfect tomatoes like the parent vine. After five years, the fruit became fleshier and larger. In 1870, Alexander introduced the Paragon, and tomato culture began at once to be a great enterprise of the county. Today, the crop is grown in every state in the Union. He eventually developed over seventeen different varieties of the tomato plant. He also developed sweet corn and cabbage varieties. Many Reynoldsburg families were employed by the Livingston Seed Company, in the fields surrounding his home and in fields of their own where they grew his seeds for his company. Families would picnic at the creek below the home to celebrate the latest harvest or seed sorting.

In 1898, Alexander Livingston died, but not before contributing to Reynoldsburg's history and the history of agriculture in the United States.

In 1965, the Franklin County Historical Society recognized Reynoldsburg as "The Home of the Tomato" and to honor this great man our City holds an annual festival in recognition of his vast accomplishments in agriculture. It is called the Tomato Festival.

The Livingston House, located at 1792 Graham Road, is available for rent. It is an ideal location for birthday parties, bridal or baby showers, or small parties. Because the home is a historic museum the rentals must be geared for adults only.